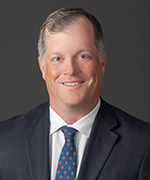 Matt Davis, FACHE, joined HCA Houston Healthcare Conroe as Chief Executive Officer (CEO) in September 2013. As CEO, Davis is responsible for overseeing the management and operations of the hospital ensuring both service line and overall strategic goals align with the development of the organization’s vision and strategic plan.

Davis joined HCA Healthcare in 2007, and previously served as Chief Operating Officer (COO) at North Florida Regional Medical Center. In addition, he has over a decade of healthcare experience in the investor-owned sector.

Davis, a Fellow of the American College of Healthcare Executives (FACHE), received his bachelor’s degree from DePauw University and his master’s degree from Indiana University. He is a member of Leadership Montgomery County, serves on the Board of Directors for the Conroe/Lake Conroe Area Chamber of Commerce and is a board member of Montgomery County Future Farmers of America. 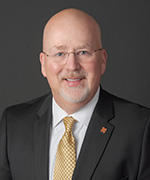 Lawrence Verfurth, DO, MBA, FACOI was appointed Chief Medical Officer (CMO) at HCA Houston Healthcare Conroe in 2017. As CMO, he ensures high quality, patient-centered care through clinical and quality initiatives that support the provision of consistent clinical performance and practice standards across the hospital.

Previously, Dr. Verfurth served as market CMO for Christus Good Shepherd Health System where he provided clinical decision support and oversaw the internal medicine residency program. He also served as Vice President and CMO at Presence Mercy Medical Center. In these roles, he proved to be passionate about patient outcomes and was instrumental in monitoring and implementing quality improvement strategies, directing activities for clinical performance and innovation.

Robert Sabina was appointed as Chief Operating Officer (COO) of HCA Houston Healthcare Conroe in September 2021. In his role, he is responsible for ensuring consistent department and service line strategy alignment as well as hospital facility initiatives including construction, new equipment, quality improvements, efficient utilization and the overall care environment of the facility.

Previously, Sabina served as COO of HCA Houston Healthcare Tomball. Additionally, he served as assistant vice president of strategy as part of HCA Healthcare Gulf Coast Division strategy and development group. Before transitioning to HCA Healthcare, Sabina held progressive leadership roles across operations and strategy functions for other Houston-area healthcare systems. He has more than 13 years of healthcare experience and joined HCA Healthcare in 2017.

Frazier received his bachelor's degree in accounting from the University of Southern Mississippi and his master's degree in business administration from Belhaven University. Most recently, he was accepted into the HCA Executive Development Program. 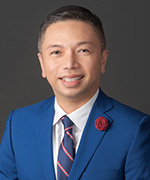 Angelo obtained his bachelor's degree in nursing from the University of Santo Tomas and an MBA in healthcare administration from Walden University. He is a board certified nurse executive through American Nurses Credentialing Center (ANCC).