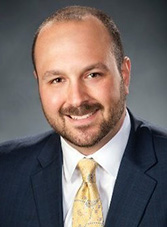 Robert Marmerstein joined HCA Houston Healthcare Tomball as the Chief Executive Officer (CEO) in July 2020. He will oversee the management and operations of the hospital ensuring both service line and overall strategic goals align with the development of the organization’s vision and strategic plan.

Marmerstein joined HCA Healthcare in 2009. Previously, he served as Chief Operating Officer (COO) of HCA Houston Kingwood for three years and as COO at HCA Houston Mainland for two years. He also served as an administrative resident at Reston Hospital Center in Reston, Virginia and as associate COO at LewisGale Medical Center in Salem, Va.

Marmerstein earned his bachelor of science degree in hospitality management from the University of Central Florida and a master's degree in Health Administration from Virginia Commonwealth University. He is a member of the American College of Healthcare Executives, a board member for the Kingwood Place West Commercial Association, and recently served as a board member of the Greater East Montgomery County Chamber of Commerce.

In 2016, Pinto was recruited to Austin, TX to launch a Hospitalist program at St. David’s Round Rock Medical Center, an HCA Healthcare facility, with Team Health. He assisted in the growth of the program into six other sister St. David’s facilities in the Austin area. From 2016 to 2021, Pinto served there in a number of medical directorships, committee chairmanships and staff positions.

A native of Bolivia, Dr. Pinto received his medical degree from Universidad Privada Nuestra Senora de La Paz in La Paz, Bolivia and went on to complete an internship in Internal Medicine at Lenox Hill Hospital in New York, NY. Pinto furthered his education with a residency and fellowship at the Texas Tech University Health Sciences Center. He then began his career as the Hospitalist Medical Director at Medical Center Hospital in Odessa, TX in 2013. Shortly after beginning his hospitalist career in 2013, Pinto led the integration of Procare Hospital Medicine until 2016.

During his time at HCA Houston Healthcare Kingwood, Moreno led expansion projects at the hospital, including increasing licensed bed capacity by 32 intensive and intermediate care beds. He also managed the expansion project for the hospital’s outpatient surgery center, increasing the number of operating rooms and endoscopy suites. Moreno served as the division director of project management with HCA Houston Healthcare from 2018 to 2020. He was responsible for monitoring the development and implementation of the Division’s top strategic priorities. Before his time at HCA Houston Healthcare, Moreno worked for six years with Ernst and Young, most recently as Performance Improvement Manager.

Moreno is a graduate of the U.S. Military Academy at West Point and U.S. Army Ranger School. He served as an officer in the U.S. Army where he was stationed in Fort Hood, TX and Bagdad, Iraq. He received his Master of Healthcare Administration from Trinity University in 2019. Moreno currently serves as the co-chair of the HCA Gulf Coast Division Veterans Colleague Network and is a member of the HCA Gulf Coast Division Diversity and Inclusion Council.

Richard Ervin joined HCA Houston Healthcare Tomball as the Chief Financial Officer (CFO) in 2017. With over 24 years of accounting and finance experience, Ervin oversees management of all financial departments, allocation of resources and preparation of the annual budget including accounting and health information. Before joining HCA Healthcare, Ervin began his career with American Medical International in 1986, which later became Tenet Healthcare, where he served as CFO for 10 years then served as CFO for nine years with Community Health Systems in Tomball, Texas.

Ervin earned a bachelor’s of accounting from Stephen F. Austin State University. He currently serves on the board of directors of TOMGWA Health Care Ministries and is a member of Healthcare Financial Management Association.

Angelle Rhemann was appointed Chief Nursing Officer (CNO) at HCA Houston Healthcare Tomball in November 2022. Most recently, she served as Interim CNO as well as ACNO at the hospital, where she excelled in driving quality initiatives, nursing engagement and nursing retention.

Previously, Rhemann worked for HCA Gulf Coast Division as Division Vice President of Nursing Practice and Operations. In this role, she oversaw the division dialysis director and was instrumental in leading numerous nursing initiatives. Collectively, she has more than 25 years of healthcare experience.

Rhemann earned her bachelor of science in nursing, master of science as an advanced practice nurse in adult health, and doctor of nursing practice from Texas Woman’s University. She is a graduate of the HCA ACNO Advanced Leadership Development Program. Additionally, Rhemann held faculty appointments to Texas Woman’s University and the University of Houston as a faculty associate and adjunct clinical faculty, respectively.