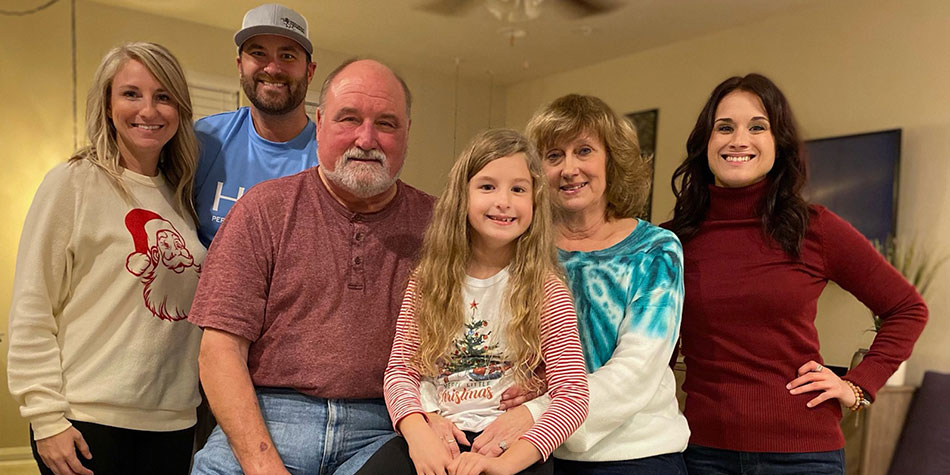 Kathy Lohberg with her family.

Kathy Lohberg has a message for those who may be putting off their annual mammogram: Don’t.

Kathy, 66, speaks from experience. The Tomball resident was diagnosed with breast cancer in April earlier this year. But thanks to a routine mammogram and early detection, her cancer is now in remission only a few short months later.

“It could’ve spread and could've been much worse,” she says.

Kathy’s advice comes at a time when it may be needed most. Data shows that screenings for breast cancer during the ongoing pandemic continue to be lower than average, putting many women at risk.

As October marks Breast Cancer Awareness Month, Kathy reaffirms there is no better time to put your health first than now.

“You’re only given the one body and you need to take care of it,” she says. “It’s such a simple procedure and it can save your life.”

Cancer is no joke

On April Fool's Day 2021, Kathy had one of the least funny days of her life.

She wasn't all that concerned at first. After all, she had a biopsy done on her right breast years before and it was benign. But for Kathy, a missed call from her doctor was a tell-tale sign something was amiss. Kathy called her doctor back: she had early-stage breast cancer.

“I looked at my husband and said, ‘well, it’s cancer’ and he goes, ‘well, what are we going to do to fix it?’ That’s pretty much how we look at most things,” she says.

Kathy and her husband, Vic, maintained a positive outlook amid her diagnosis. When Dr. Montgomery referred her to Dr. Kim Keller, a general surgery specialist at HCA Houston North Cypress, she says she knew she was in good hands. 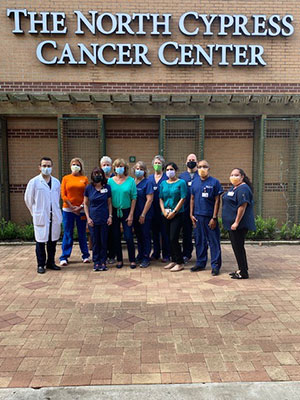 “He told me this was the surgeon he’d recommend for his own wife or daughter,” Kathy says.

Dr. Keller's first order was for Kathy to get predictive genetic testing. Though she was already diagnosed with breast cancer, the test would help Dr. Keller determine Kathy’s treatment options and understand her risks of developing other forms of cancer.

Kathy was unsure what the test would reveal. At the time, Kathy’s cousin was also diagnosed with the same type of breast cancer as she was. And her mother’s own battle with breast cancer years earlier was still fresh on her mind. Fortunately, the test showed Kathy's cancer was not genetic.

“It was a blessing,” she says.

Kathy then met with medical oncologist Dr. Nikesh Jasani and the rest of her multidisciplinary oncology team. This included an oncology nurse navigator, a specially-trained nurse who helps cancer patients navigate the often-challenging corridor of cancer. Together, the team worked to provide the patient-centered, comprehensive care that HCA Houston North Cypress is known for.

“They make you feel like you're their only patient. That means a lot,” she says.

In May, after weighing all of her treatment options with her team, Kathy had a lumpectomy to remove the cancerous tissue in her breast. She praises Dr. Keller, who had a pathologist by his side to look at her cells and ensure they removed all of the cancerous tissue.

“They were so thorough and caring,” she says. “And I healed beautifully.”

The procedure was followed by 33 days of radiation treatment.

By July, Kathy's cancer was in remission.

Kathy credits the support of her husband, along with her daughter and son, for helping her get through her journey. She also credits her oncology team at HCA Houston North Cypress.

“They were so caring. I can’t say enough good things about them,“ Kathy says of the hospital staff, adding how everyone from the front desk to the radiation techs made her feel welcomed. "I love that group.”

So much so, that her final days of radiation treatment felt bittersweet, she says.

“My husband looks over to me and says, ‘I can't believe I'm going to say this, but I'm going to miss coming here.’ And I said, ‘you know what, I was thinking the same thing.’ ”

“The average individual will receive approximately six weeks of radiation; therefore, a patient will really get to know his/her treatment team and vice-versa,” Pollard says. “It is always our goal to support our patients and we are committed to making everyone feel as Ms. Lohberg did. We are proud of the work we do and that we can make even a small difference in someone’s life.” 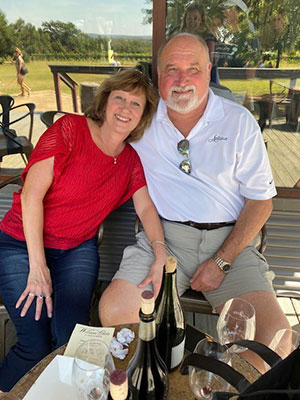 Kathy Lohberg and her husband Vic celebrate in Fredericksburg following the completion of her radiation treatment.

Kathy will have one more follow-up appointment in November with her radiation oncologist, Dr. Ali Mazloom, and then will be required to have checkups every three to four months for the next two years.

October 11, 2021
Experts are predicting more severe flu cases than there were last season. Here's how to protect yourself and your loved ones.
Next Post
Back to blog home