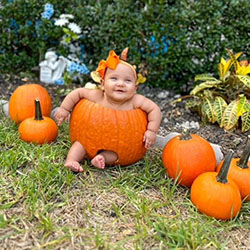 Mikaela Mayton is nearly 10 months old and ready for her first Halloween.

The journey to parenthood is different for everyone. Aylen Mayton and her husband Chad struggled to conceive for three years before finally getting a positive pregnancy test. Their excitement and joy were doubled two weeks later when they found out she was pregnant with boy-girl twins.

“We were in love, we were scared, we were excited and we were nervous, all at the same time,” said Aylen.

About 12 weeks into her pregnancy, Aylen started spotting and learned her son had anencephaly, a serious birth defect that prevents the normal development of the brain and skull bones.

Dr. Brian Kirshon, a maternal and fetal medicine specialist at The Woman’s Hospital of Texas, explained that even if her son was born alive, he would die soon after birth. According to the March of Dimes, anencephaly is one of the most severe birth defects of the brain and spinal cord. It affects approximately 1,000 babies each year in the United States. Babies born with this condition do not survive long after birth, usually for just a few hours.

In December 2021, Aylen caught COVID-19, which increased her risk of severe illness and the likelihood she would deliver her babies before the 37th week of pregnancy.

During an early morning walk around her neighborhood, her water broke and she was rushed to The Woman’s Hospital of Texas an HCA Houston Healthcare hospital dedicated to the health of women and newborns. “My twins were in separate sacs,” says Aylen. “My son’s water broke, but my daughter’s didn’t. We knew my son wasn’t going to make it, so they put me on bed rest to keep me pregnant as long as possible so my daughter could have a thriving chance to survive.”

She was admitted to the antepartum unit (APU) which provides expectant mothers on bed rest with a private room and the additional support and special care they need. 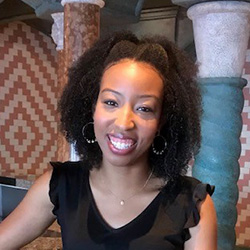 The program coordinators provide families with children in the neonatal intensive care unit (NICU) as well as staff with an extra layer of support during what can be a stressful time. They meet with each family upon admission to the hospital or within the first few days of their baby being admitted to the NICU.

“We really like to stress that every baby is different,” says Clark. “We don't know what the NICU course is going to be like, but we definitely try to make sure that they have the appropriate information.”

On January 28, Aylen gave birth to Mikaela and Mikael Mayton. Their daughter Mikaela was taken to the NICU for specialized care, while Aylen and Chad sat in her hospital room holding onto every precious moment they had with their son Mikael.

“I remember asking, ‘what do I do now?,’” says Aylen. “Brandi pointed me in the direction of a few resources and got me to talk to some people who could help me navigate things. The first few days I would go in to see my daughter and all I could do was cry because I missed my son. Brandi was there to give me a hug and reassure me that everything was going to be OK.”

The Woman’s Hospital of Texas has a Level IV NICU, which offers the highest level of care available for newborns who are premature, critically-ill, or have a life threatening health condition. The March of Dimes has served the families here for more than 10 years through programs like the NICU Family Support Program. The program is built around three core objectives:

One of Aylen’s fondest memories of Mikaela’s time in the NICU was watching her grow and celebrating her firsts.

“I remember the very first outfit we got to put on our daughter,” Aylen says. “It was such a big deal because we had these little milestone cards that we were able to put with my daughter and take pictures to really just commemorate the moment.”

The March of Dimes provides families with milestone cards so they can document all the moments in their baby’s early life. Celebrating those small but mighty achievements helped the Maytons be present in their journey and served as reminders that there is so much joy to still celebrate.

“Getting to celebrate those milestones with families and just being a part of helping them create memories for their baby during a challenging time, I think is most rewarding for me,” said Brandi.

After spending 8 weeks in the NICU, the moment the Maytons had waited and prayed for was here – Mikaela graduated from the NICU and was able to go home.

“Even through all of the challenges that [Aylen] was facing with the loss of her son and then also having Mikaela, her little girl in the NICU, she was always just so optimistic and upbeat,” says Clark.

Marching for the health of all mothers and babies

Dedicated to leading the fight for the health of all moms and babies, the March of Dimes is a nonprofit organization fueled by generous support from corporate partners and community supporters.

HCA Healthcare is a national partner with the March of Dimes and is one of the nation's leading providers of obstetrical care, welcoming more babies than any other U.S. healthcare provider in the country.

Their largest fundraiser, March for Babies is an annual event that brings together people in communities all across the country to raise critical funds for research, advocacy and education to ensure every mom and baby has the opportunity to be healthy and strong.

On April 24, 2022, for the first time in two years, Houston’s March for Babies was an in-person event. HCA Houston Healthcare’s very own Jeanna Bamburg, chief executive officer of The Woman's Hospital of Texas and longtime supporter of March for Babies, served as chair of the event.

“Although we see thousands of healthy babies born each year in the Greater Houston area, we also see thousands of babies who need life-saving treatments in our NICUs,” Bamburg said. “The work of the March of Dimes is unparalleled in what they do for moms and babies, and I’m so proud to be a part of this important work that affects so many lives.”

March of Dimes hopes the powerful impact of their various programs will last far into the future, and that families will remember how their community and March of Dimes supported them when they needed it most.

“I never knew who they were until I needed them,” said Aylen. “Without the March of Dimes, I would have continued to be overwhelmed. They helped us celebrate. They helped us keep going and they helped us say she’s almost there.”

When to visit the emergency room for an allergic...

October 28, 2022
Allergic reactions can range from mild to severe. With severe allergic reactions, it's important to administer epinephrine and go to an ER.
Previous Post

How to familiarize yourself with your breasts ...

October 11, 2022
Women should take note of any changes or irregularities in the look and feel of their breasts.
Next Post
Back to blog home

COVID-19 phobia? Why you should not delay emergency care.

Irregular heartbeat? When to see an electrophysiologist